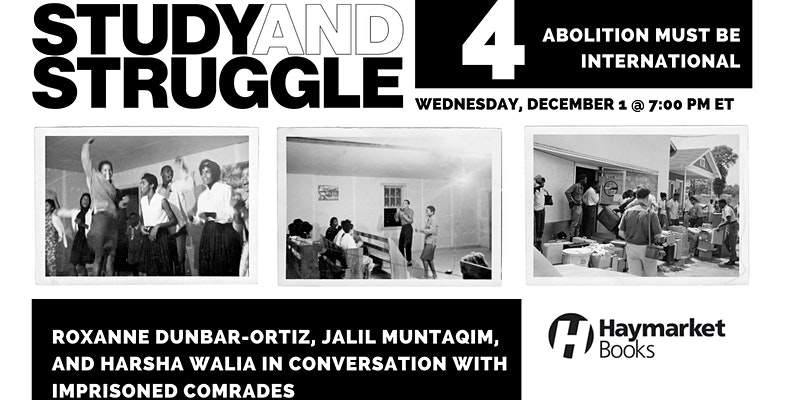 A conversation about centering internationalism in the fight for abolition with Jalil Muntaqim, Roxanne Dunbar-Ortiz, and Harsha Walia.

Study and Struggle organizes against criminalization and incarceration in Mississippi through mutual aid, political education, and community building. We provide a bilingual Spanish and English curriculum with discussion questions and reading materials, as well as financial support, to over 100 participants in radical study groups inside and outside prisons in Mississippi. These groups correspond with groups from across the country through our pen pal program. We regularly come together for online conversations hosted by Haymarket Books. The curriculum, built by a combination of currently- and formerly-incarcerated people, scholars, and community organizers, centers around the interrelationship between prison abolition and immigrant justice, with a particular attention to freedom struggles in Mississippi and the U.S. South.

For our Fall 2021 four month curriculum, we have borrowed and augmented Ruth Wilson Gilmore's argument that “abolition is about presence, not absence. It has to be green, and in order to be green, it has to be red (anti-capitalist), and in order to be red, it has to be international," having added “intersectional” as a fourth analytical category that we hope moves us beyond “single-issue” organizing. Study and Struggle provides a bilingual curriculum to all our imprisoned comrades in Mississippi with the support of our friends at 1977 Books and makes it fully available online for other study groups to use as they see fit.

Our Critical Conversations webinar series, hosted by Haymarket Books, will cover the themes for the upcoming month. Haymarket Books is an independent, radical, non-profit publisher.

Our fourth webinar theme is "International" and will be a conversation about what it means for abolition to be internationalist, centering questions about the role of nations, states, and borders in maintaining hierarchy and subjugation, as well the necessity of organizing across and beyond them for collective liberation.

While all of our events are freely available, we ask that those who are able make a solidarity donation in support of commissary and mutual aid for our incarcerated participants.

***Register through Eventbrite to receive a link to the video conference on the day of the event. This event will also be recorded and will have live captions and ASL interpretation available.***

Jalil Muntaqim is currently on parole after being wrongfully incarcerated for half a century at Attica Correctional Facility and Southport Correctional Facility. While incarcerated Jalil faced numerous attempts of retaliation by the state—including routine denial of parole. Before he was incarcerated, he was a member of the Black Panther Party and the Black Liberation Army. He is the author of We Are Our Own Liberators: Selected Prison Writings, a collection of essays that he wrote while in prison.

Roxanne Dunbar-Ortiz has been active in the international Indigenous movement for more than four decades and is known for her lifelong commitment to national and international social justice issues. Dunbar-Ortiz is the winner of the 2017 Lannan Cultural Freedom Prize, and is the author or editor of many books, including An Indigenous Peoples’ History of the United States, a recipient of the 2015 American Book Award, and Not A Nation of Immigrants. Connect with her at reddirtsite.com or on Twitter @rdunbaro.

Harsha Walia is the award-winning author of Undoing Border Imperialism and Border and Rule. Trained in the law, she is a community organizer and campaigner in migrant justice, anti-capitalist, feminist, and anti-imperialist movements, including No One Is Illegal and Women's Memorial March Committee.

The program will also include speakers who are currently incarcerated.