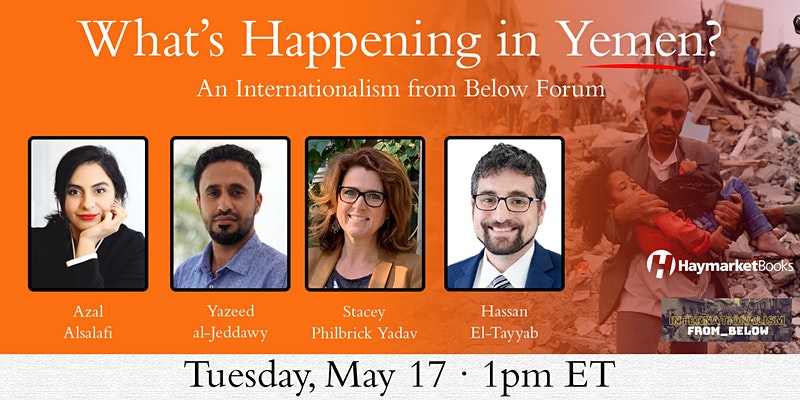 Join a panel of Yemeni scholars and activists for a bottom-up perspective on the conflict in Yemen.

The recent ceasefire in Yemen and upcoming peace talks promise a possible end to a nightmarish six-year-long conflict that has generated one of the worst humanitarian crises in the world. International commentary tends to frame the conflict as a proxy war between regional powers and remains narrowly focused on dynamics between the Saudi-led coalition and the Houthis.

Missing from this picture are the projects and priorities of Yemeni activists, social movements, and grassroots organizations. We rarely hear the voices of Yemeni women, youth, or ordinary people. Yet these forces will be essential to the post-war peace-building process. Yemeni civilians are doing more than simply surviving against punishing odds. A durable settlement to the conflict will be impossible without them.

How might both the war in Yemen and the prospects for peace look different with these voices at the center? By featuring Yemenis who work directly in and with these movements, this panel will provide an important bottom-up perspective that can supplement and challenge prevailing accounts of the conflict.

Azal Alsalafi is a Research Fellow at the Yemen Policy Center in Berlin and Protection and Advocacy Officer at the Peace Track Initiative, which was founded by Yemeni women inside and outside Yemen who came together in 2015 to support the peace process in Yemen. Her research and work focus on pathways of protection, feminist foreign policies, socio-economic dynamics and their impact on human rights and peace-building. She practiced law and worked on cases with the International Court of Arbitration of the International Chamber of Commerce in Paris and then shifted her career focus towards human rights, entrepreneurship and socioeconomic development with a focus on migration potential.

Yazeed al-Jeddawy is a fellow at the Yemen Peace Forum and an independent research consultant. He has co-authored papers and policy briefs on youth, arts, transitional justice, development and peace-building in Yemen. He previously worked as a coordinator of youth-focused projects/programs at Youth Without Borders Organisation for Development (YWBOD), and as Education Program Manager at Nahda Makers Organization. Al-Jeddawy has also served as the MENA Regional Representative of the United Network of Young Peacebuilders (UNOY) for two consecutive terms between 2018 and 2022.

Stacey Philbrick Yadav is Associate Professor of International Relations at Hobart and William Smith Colleges. She is the author of Yemen in the Shadow of Transition: Pursuing Justice Amid War, which will be published in September 2022, and Islamists and the State: Legitimacy and Institutions in Yemen and Lebanon (2013). She co-edited The Fight for Yemen, a special issue of Middle East Report, the magazine of the Middle East Research and Information Project (MERIP). Since 2019, she has been working with Yemeni colleagues on internationally sponsored projects for everyday peacebuilding in Yemen.

Recent article: “For durable peace in Yemen, inclusion must mean more than simply a voice for civil actors”

Hassan El-Tayyab is Legislative Director for Middle East Policy at the Friends Committee on National Legislation (FCNL) in Washington. Prior to joining FCNL in August 2019, he was co-director of Just Foreign Policy, where he led the organization’s lobbying work to advance a more progressive foreign policy in the Middle East and Latin America. He played a major role in the successful passage of the War Powers Resolution to end U.S. military participation in the Saudi-led coalition’s war and blockade on Yemen. His writings and commentaries have appeared at Al Jazeera, BBC World News, CNN, The Hill, The Huffington Post, The Intercept, POLITICO, Responsible Statecraft, and Truthout, among other outlets.

This event is sponsored by the Internationalism From Below and Haymarket Books. While all of our events are freely available, we ask that those who are able make a solidarity donation in support of our important organizing, programming and publishing work.