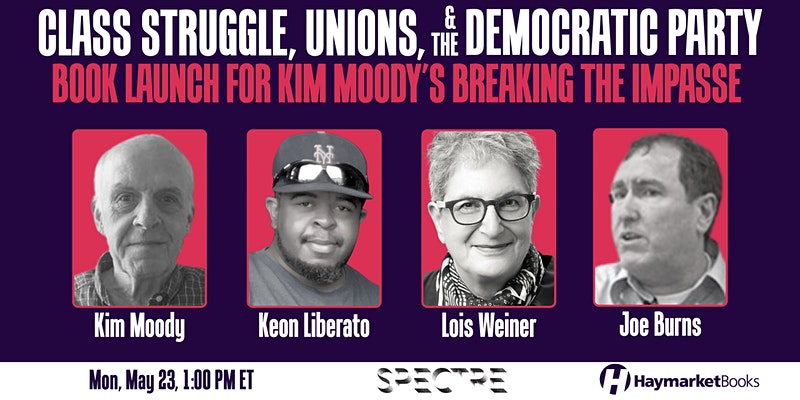 Join Haymarket and Spectre Journal for a launch of Kim Moody’s new book, Breaking the Impasse.

Unlike most countries, the US has no labor party, let alone a mass socialist party. In an effort to overcome this predicament, a new generation of militants hope to transform the Democratic Party or use its ballot to build forces inside it for an eventual “dirty break.” In his new book, Moody argues this electoral orientation is a trap and that socialists should instead build class and social struggle and galvanize a militant minority as the preconditions for the formation of a working class party.

Get the book, Breaking the Impasse: https://www.haymarketbooks.org/books/1873-breaking-the-impasse

Kim Moody was a founder of Labor Notes in the US and is the author of several books on labour and politics including Breaking the Impasse: Electoral Politics, Mass Action & the New Socialist Movement in the United States (2022); Tramps & Trade Union Travelers: Internal Migration and Organized Labor in Gilded Age America (2017); and On New Terrain: How Capital Is Reshaping The Battleground Of Class War; all from Haymarket. He has a PhD from the University of Nottingham and is currently a Visiting Scholar at the University of Westminster in London. He is a member of the University and College Union and the National Union of Journalists.

Joe Burns is a veteran union negotiator and labor lawyer with over 25 years experience negotiating labor agreements. He is currently the Director of Collective Bargaining for the Association of Flight Attendants, CWA. He graduated from the New York University School of Law. Prior to law school he worked in a public sector hospital and was president of his AFSCME Local. He is the author of Class Struggle Unionism, Strike Back: Rediscovering Militant Tactics to Fight the Attacks on Public Employee Unions and Reviving the Strike: How Working People Can Regain Power and Transform America.

Keon Liberato is a railroad track construction worker and president of Track Local 3012 in the Teamsters Brotherhood of Maintenance of Way Employees Division (BMWED) Teamsters Rail Conference. He is a co-founder and co-chair of the BMWED-IBT Rank & File United reform caucus. Liberato is a member of the Democratic Socialist of America where he served as a member of the National Political Committee from 2020-2021.

Lois Weiner, Professor Emerita, New Jersey City University, is a career teacher, education researcher, and teacher union activist. Her new book, as yet untitled, takes up what the Left can learn about defending social justice and workers' rights by examining capitalism's latest project to deprofessionalize teaching, undercut teachers' labor activism, and destroy public education. Chapters One and Two have been published by New Politics and Tempest.

This event is sponsored by Spectre Journal and Haymarket Books. While all of our events are freely available, we ask that those who are able make a solidarity donation in support of our important publishing and programming work.