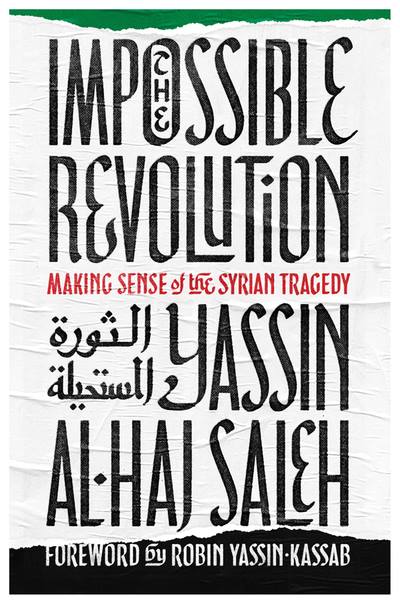 The Impossible Revolution: A Forum

Yassin al-Haj Saleh is a critical figure in the Syrian revolution and one of Syria’s foremost political thinkers. For the crime of political activism and membership in the Syrian Communist Party (Political Bureau), he spent sixteen years (1980-1996) as a political prisoner, including a final year in the infamous prison Tadmor, which the poet Faraj Bayradqdar called “the kingdom of death and madness.”

Saleh, who has been compared to Gramsci, is the author of multiple books in Arabic. None of his were available in English — until now. His long-awaited The Impossible Revolution: Making Sense of the Syrian Tragedy is a work of towering significance. It has been called “a searing and heartfelt critique of a crisis which is no longer just Syria’s, but the world’s.” Its publication by Haymarket Books is a major international event.

Please join us for this forum on this extraordinary book, featuring a range of scholars, activists, and filmmakers:

Wendy Pearlman is the Koldyke Outstanding Teaching Associate Professor of Political Science at Northwestern University. She is the author of Occupied Voices: Stories of Everyday Life from the Second Intifada (2003), Violence, Nonviolence, and the Palestinian National Movement (2011), and We Crossed a Bridge and it Trembled: Voices from Syria (2017). Based on interviews that Pearlman conducted with more than 300 Syrian refugees across the Middle East and Europe since 2012, the book is a mosaic of first-hand stories and reflections that chronicle the Syrian conflict exclusively through the words of people who have lived it.

Firas Aladai is a Syrian photographer, writer, and filmmaker who teaches film production and digital photography at DePaul University. His first narrative feature film, Winter, premiered at the Arab Film Festival in Rotterdam, The Netherlands, and was shown at several art house and international film festivals. He recently completed a photography project documenting his travels in Central and South America, and is currently working on a screenplay about a Syrian family living in Istanbul. He earned an MFA in Film, Video, New Media, and Animation from the School of Art Institute of Chicago in 2014.

Lina Sergie Attar is a Syrian-American architect and writer from Aleppo. She is the co-founder of the Karam Foundation, an international humanitarian organization, and co-developer of its Innovative Education initiatives, a creative therapy and holistic wellness program for displaced Syrian children. She was named one of GOOD magazine's 2016 GOOD 100 for Karam's innovative work with Syrian refugees. She is a co-founder of the How Many More? project and serves on the Board of Directors of The Syria Campaign. Her writing has appeared in Syria Deeply, the New York Times, Foreign Policy, Politico, and the Chicago Tribune.

Danny Postel is the Assistant Director of the Middle East and North African Studies Program at Northwestern University and an editor of the blog PULSE. He is co-editor of The People Reloaded: The Green Movement and the Struggle for Iran’s Future (2010), The Syria Dilemma (2013), and Sectarianization: Mapping the New Politics of the Middle East (2017) and the author of Reading “Legitimation Crisis” in Tehran (2006). His writing has appeared in The Cairo Review of Global Affairs, Critical Inquiry, Democracy: A Journal of Ideas, Dissent, The Guardian, In These Times, Mother Jones, The Nation, New Politics, the New York Times, The Progressive, Salmagundi, and the Washington Post.

Sarah Hunaidi is a Syrian writer, women’s rights and human rights activist. She worked for several years with refugee children in Syria, Lebanon, and Turkey and has extensive experience in psychosocial support and gender-based issues. She is the co-founder of an international non-governmental organization (INGO) called New Syrian Human, which operates in Turkey and focuses on women’s rights and education. She works at RefugeeOne, a resettlement agency in Chicago, and co-hosts the podcast Hummus for Thought. She is currently translating the diaries under siege of the Syrian activist Samira al-Khalil, Yassin al-Haj Saleh’s wife, who was kidnapped from Eastern Ghouta in 2013.

‘Saleh’s personal tragedy reveals him as an authentic voice trying to understand how the genuine, progressive revolt he supported went so horribly wrong.’ —New York Review of Books

‘Reading The Impossible Revolution, a Western audience has the opportunity to eavesdrop on the conversation that has been going on between Syrians since the beginning of the conflict.’ —Times Literary Supplement

‘“Where is cool-headed, clear thinking to be found, in a world of al-Sada, jinn, and ghosts?” … One might say it is to be found in the pages of [Saleh’s] book, where he examines the origins of the violence, delves into the ideology of the Ba’ath Party that has ruled the country since 1963, methodically dissects the phases of the revolution, and charts the lurch into sectarianism’. —The New York Review of Books

‘A searing and heartfelt critique of a crisis which is no longer just Syria’s, but the world’s. Born in Raqqa and imprisoned under the Assads for sixteen years, Yassin al-Haj Saleh is now recognised as ‘the conscience of the Syrian Revolution.’ No other voice has such clarity or integrity.’ —Diana Darke, author of My House in Damascus: An Inside View of the Syrian Crisis

‘The appearance of Yassin al-Haj Saleh’s work in English has been long awaited. It’s vitally important to listen to Syrian voices on the events which are happening in their country. Yassin is one of Syria’s most engaging revolutionary thinkers, and he provides valuable context to a democratic revolution and vicious counter-revolution which has often been wilfully misunderstood by commentators in the West. Expert analysis and powerful personal testimony are interwoven in this book, which is indispensable for anyone wishing to further their understanding of the Syrian tragedy.’ — Leila Al Shami, co-author of Burning Country: Syrians in Revolution and War

Copies of The Impossible Revolution will be available for sale at the event.

This forum is free of charge and open to the public.