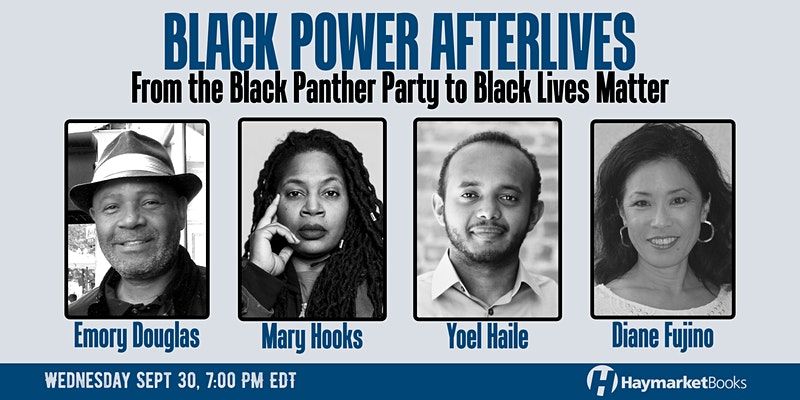 Emory Douglas, Mary Hooks, Yoel Haile, and Diane Fujino discuss the enduring impact, and multiple meanings, of the Black Panther Party in the context of the movement for Black lives, allowing today’s organizers and readers to situate themselves in the long lineage of the Black Radical Tradition.

Today’s Movement for Black Lives is building a radically transformative struggle that demands structural change and places Black liberation at its center. Fifty years ago, the Black Power movement asserted similarly bold demands and audacious actions. Then and today, we bear witness to and seek to intervene in such critical moments when radical ideas seem to suddenly take hold and unprecedented opportunities emerge for far-reaching change.

The Black Panther Party (BPP)’s struggles against police violence and efforts to create a liberatory society are particularly relevant to today’s struggles. Black Power Afterlives: The Enduring Significance of the Black Panther Party, edited by Diane C. Fujino and Matef Harmachis, offers the first extended examination of the BPP's role in shaping the practices and ideas that have animated grassroots activism in the decades since its decline.

Mary Hooks is the co-director of Southerners on New Ground (SONG). SONG is a political home for LGBTQ liberation across all lines of race, class, abilities, age, culture, gender, and sexuality in the South. We build, sustain, and connect a southern regional base of LGBTQ people in order to transform the region through strategic projects and campaigns developed in response to the current conditions in our communities. SONG builds this movement through leadership development, coalition and alliance building, intersectional analysis, and organizing. Mary’s commitment to Black liberation, which encompasses the liberation of LGBTQ folks, is rooted in her experiences growing up under the impacts of the War on Drugs. Her people are migrants of the Great Migration, factory workers, church folks, Black women, hustlers and addicts, dykes, studs, femmes, queens and all people fighting for the liberation of oppressed people.

Yoel Haile is a Criminal Justice Associate with the ACLU of Northern California. Yoel grew up in Asmara, Eritrea, and moved to California in 2006. He attended the University of California, Santa Barbara as an undergraduate, where he helped initiate and negotiate Black student demands to the campus chancellor that resulted in more than $3.7 million in immediate and committed funding for the recruitment and retention of Black students, staff and faculty. As the Political Director of the Afrikan Black Coalition - a statewide Black youth organization - Yoel helped lead campaigns that resulted in the University of California divesting all of its nearly $30 million in holdings from private prison companies and terminating $475 million in contracts with Wells Fargo.

Diane Fujino (moderator) is co-editor, with Matef Harmachis, of Black Power Afterlives: The Enduring Significance of the Black Panther Party. She studies, writes, and teaches about Asian American and Black liberation movements. Her books include: Heartbeat of Struggle: The Revolutionary Life of Yuri Kochiyama; Samurai Among Panthers: Richard Aoki on Race, Resistance, and a Paradoxical Life; and Nisei Radicals: The Feminist Poetics and Radical Ministry of Mitsuye Yamada and Michael Yasutake (forthcoming); and as editor, Wicked Theory, Naked Practice: A Fred Ho Reader. She is in the core leadership of the Ethnic Studies Now! Santa Barbara Coalition and a founding member of Cooperation Santa Barbara, which seeks to develop an alternative solidarity economy based in deeply democratic participation and community building.