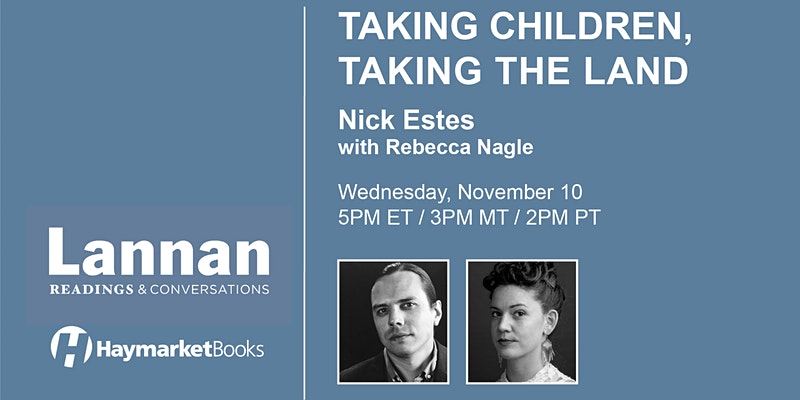 Join Nick Estes and Rebecca Nagle for an urgent discussion of the ongoing attack on Indigenous children and Indigenous land.

Nick Estes puts into historical context recent headlines surrounding the discovery of mass graves of Native children at Canadian residential schools. The removal of Indigenous children from their communities and families has a long genocidal legacy that persists today, well beyond the boarding school era in Canada and the United States. The attack on Indigenous children is an attack on Indigenous sovereignty and land, and there is urgency to uphold protections that are under assault by the right wing, such as the Indian Child Welfare Act.

***Register through Eventbrite to receive a link to the video conference the day before the event. This event will also be recorded. Live captioning will be available via the webcast.***

Nick Estes is a citizen of the Lower Brule Sioux Tribe. He is the author of Our History Is the Future: Standing Rock Versus the Dakota Access Pipeline, and the Long Tradition of Indigenous Resistance (Verso, 2019), coeditor with Jaskiran Dhillon of Standing with Standing Rock: Voices from the #NoDAPL Movement (University of Minnesota Press, 2019), and coauthor with Melanie K. Yazzie, Jennifer Nez Denetdale, and David Correia of Red Nation Rising: From Bordertown Violence to Native Liberation (PM Press, 2021). In 2014 he cofounded The Red Nation, an Indigenous resistance organization, and he is cohost of The Red Nation podcast. His writing has appeared in the Guardian, Intercept, Jacobin, Indian Country Today, High Country News, and other publications. Estes was an American Democracy Fellow at the Charles Warren Center for Studies in American History at Harvard University (2017–2018) and until 2021 was an assistant professor in the American Studies Department at the University of New Mexico. He joins the faculty of the University of Minnesota Department of American Indian Studies in 2022.

Rebecca Nagle is an award-winning journalist and citizen of the Cherokee Nation. Nagle hosted Crooked Media’s podcast This Land, telling the story of a Supreme Court case about tribal land in Oklahoma, the small town murder that started the case, and the surprising connection to her own family history. You can find her writing on issues of Native representation and tribal sovereignty in the Atlantic, the Washington Post, the Guardian, USA Today, Teen Vogue, Indian Country Today, and other publications. Nagle was awarded the 2020 American Mosaic Journalism Prize for her reporting. She has also been named to the YBCA 100 and the National Center for American Indian Enterprise Development’s Native American 40 under 40. Nagle lives in Tahlequah, Oklahoma.

This event is a partnership between Lannan Foundation and Haymarket Books.

Lannan Foundation's Readings & Conversations series features inspired writers of fiction, nonfiction, and poetry, as well as cultural freedom advocates with a social, political, and environmental justice focus. We are excited to offer these programs online to a global audience. Video and audio recordings of all events are available at lannan.org.

Haymarket Books is a radical, independent, nonprofit book publisher based in Chicago. Our mission is to publish books that contribute to struggles for social and economic justice. We strive to make our books a vibrant and organic part of social movements and the education and development of a critical, engaged, international left.