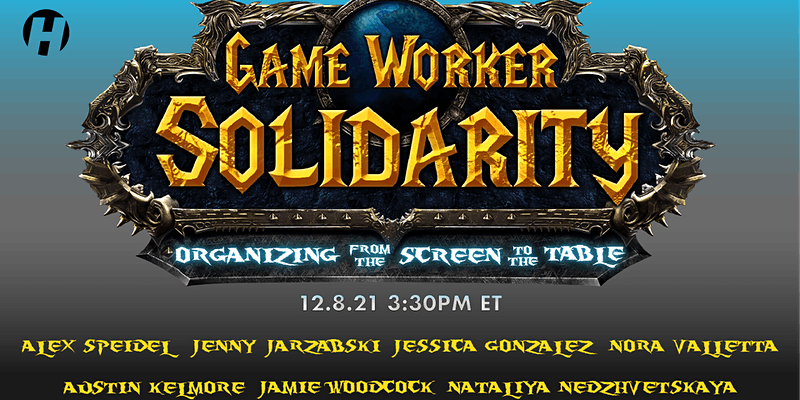 Game Worker Solidarity: Organizing from the Screen to the Table

Join Haymarket Books and worker organizers from the Games industry to celebrate the launch of the Game Worker Solidarity website.

The Game Worker Solidarity Project is mapping and documenting collective movements by game workers striving to improve their working conditions. They are collecting materials created by workers for these movements and aim to document the longer history of resistance in the industry which goes back to its formation.

This event launches the project website, backed by a database of events that can be freely searched by location, type of action, and numbers involved for events like the creation of trade union branches, new contracts, strikes, protests, social media campaigns. The goal is to create a living resource that can help support and inspire more organizing in the games industry. To start that off, this event will feature organizers from the campaign at Activision Blizzard and the recent unionization of the games company Paizo.

Jessica Gonzalez is an organizer of the campaign against sexual harassment at Activision Blizzard, where workers have launched an open letter and held walkouts in recent weeks.

Jenny Jarzabski is a founding member of United Paizo Workers. She is also an organized play developer for Paizo Inc., as well as a freelance writer and game designer. Her credits include work for Paizo Inc., Kobold Press, Rogue Genius Games, and Playground Adventures.

Austin Kelmore is a 14 year veteran of the games industry, founding member and former chair of the IWGB (Independent Workers Union of Great Britain) Game Workers Branch, and co-creator of Game Worker Solidarity.

Nataliya Nedzhvetskaya is a doctoral student in sociology at University of California, Berkeley, fellow in Digital Ethics & Governance at the Jain Family Institute, and archivist at Collective Action in Tech.

Nora Valletta is a software engineer at Blizzard Entertainment, and has been part of the campaign against sexual harassment at Activision Blizzard.

Jamie Woodcock is a senior lecturer at the Open University and a researcher based in London. He is the author of The Fight Against Platform Capitalism, The Gig Economy, Marx at the Arcade, and Working the Phones.

This event is sponsored by Notes From Below and Haymarket Books. While all of our events are freely available, we ask that those who are able make a solidarity donation in support of our important publishing and programming work.