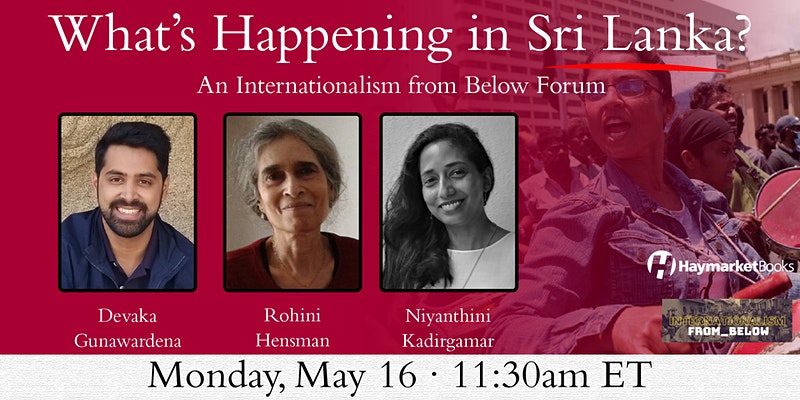 Join us for a discussion of the multiplying crises and the emergence of a new protest movement in Sri Lanka.

Internationalism from Below (IfB) is a grassroots, all-volunteer network of socialist internationalists whose primary orientation is to support and popularize mass struggles from below of working and oppressed peoples throughout the world. IfB opposes all kinds of state and imperial violence, and aims to provide a positive alternative to the elements of the anti-war left that whitewashes the violence of repressive regimes.

Since the beginning of the year, Sri Lanka has been facing its largest economic crisis since the country’s independence from Britain in 1948. Gotabaya Rajapaksa’s regime has defaulted on the foreign loans Sri Lanka has amassed over the years, especially sovereign bonds, and struggled to deal with the economic collapse triggered by multiple factors, including the collapse of tourism revenues with the onset of the Covid-19 pandemic. Sri Lanka’s currency, the rupee, is being rapidly devalued, while average citizens cannot afford basic necessities. Since March, protests have spread across the country, and the President’s cabinet except for the Prime Minister resigned. The Rajapaksa administration—which has spent the past several years attempting to consolidate power through authoritarian measures—has ignored the growing consequences of the economic crisis caused by the build up of foreign loan obligations.

How do we make sense of the different political visions and actors in the region in light of the growing contradictions of the neoliberal economy and the limitations of authoritarian regimes to manage the effects of crisis? How are the Sri Lankan mass protests providing a new political vision against the forces of debt-run globalization as they continue to decimate regions of the global South? How do we reckon with the movement’s limits—its complex relationship with Tamil self-determination, and the historical legacy of the electoral left’s betrayal of independent mass politics, among other factors?

This panel aims to provide an introduction to the situation in Sri Lanka today from left-wing perspectives, while contextualizing it in the region’s larger political and economic history and issues. The speakers will touch on topics like Sri Lanka’s political economy, local dynamics of racism and authoritarianism in blocking class politics, and grassroots feminist movements’ program and demands.

Devaka Gunawardena is an independent researcher who holds a Ph.D. from the University of California, Los Angeles, with a general focus on political economy.

Rohini Hensman is a writer, researcher, and activist who comes from Sri Lanka and is resident in India and has written extensively on workers’ rights, feminism, minority rights, globalisation, and a Marxist approach to struggles for democracy. Her most recent books are Workers, Unions, and Global Capitalism: Lessons from India and Indefensible: Democracy, Counter-Revolution, and the Rhetoric of Anti-Imperialism. She has also written two novels: To Do Something Beautiful, inspired by her work with working-class women and trade unions in Bombay, and Playing Lions and Tigers, set in Sri Lanka.

Recent article: ‘The Struggle for Democracy in Sri Lanka’

Niyanthini Kadirgamar is a Ph.D. student in Education at the University of Massachusetts, Amherst. She is part of the Feminist Collective for Economic Justice.

Promise Li is an activist and writer from Hong Kong and Los Angeles. He organizes international solidarity work with Internationalism from Below and Lausan Collective.

This event is sponsored by the Internationalism From Below and Haymarket Books. While all of our events are freely available, we ask that those who are able make a solidarity donation in support of our important organizing, programming and publishing work.