One year after the nightmare of Election Night, it’s easy to still feel shock at how a moral monstrosity came to occupy the world’s most powerful office. Danny Katch, author of the new book Why Bad Governments Happen to Good People, looks back at the election that gave us Donald Trump. 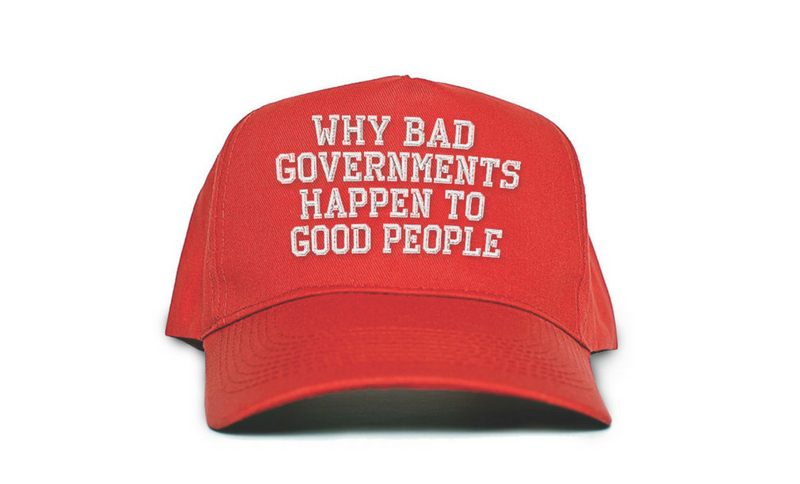 ONE YEAR ago on November 8, Donald Trump was elected the leader of the most powerful nation on the planet, leaving many hundreds of millions of people in the U.S. and around the world in a state of shock.

Pretty much every week since has confirmed our worst fears about Trump in the White House: blatant encouragement of white supremacists, terrifying Twitter threats against North Korea, criminal neglect of Puerto Rico after Hurricane Maria, and so much more.

There have also been many inspiring examples of resistance: from the millions who marched in Women’s Marches across the country on the day after the inauguration, to the brave athletes sustaining Colin Kaepernick’s national anthem protest against racist police violence, in the face of threats from Internet trolls, employers and even Trump himself.

Yet even after a year of this emotional roller coaster, we find ourselves in some ways in the same place we were a year ago—still in shock that this moral monstrosity occupies the world’s most powerful office.

The feeling lingers in part because Trump is a master at using shock as a tool of distraction and media manipulation—it’s one of the few things he’s actually good at.

But there’s another reason: Because Trump’s presidency shows that most of what we’ve been taught about American democracy is a lie—and that can take a while to sink in. Trump is running the country the same way he got elected, by appealing to the relatively small minority of the population that supports him. That’s not how a democracy based on the principle of majority rule is supposed to work.

But the United States is a democracy in name only, and not only because our bizarre Electoral College system-- created to keep give disproportionate power to the slave South—enabled Trump to “win” despite getting almost 3 million fewer votes than Hillary Clinton.

The even deeper problem with our dysfunctional democracy is that it’s so institutionally biased to favor the wealthy, the powerful and the reactionary that it enables the rule of a deeply unpopular hard-right minority, which has never been more apparent than today.


It’s useful to remember how Trump managed to get elected a year ago, because if we don’t build the left-wing alternative that tens of millions of people are looking for, he might well remain in power, despite his breathtaking incompetence—for the same reasons he was able to win in the first place.


TRUMP HAS been widely disliked from the day in June 2015 that he launched his presidential campaign by calling Mexicans “rapists,” right through to today—even the exit polls on Election Day showed that only 38 percent of voters had a favorable opinion of him.

Trump started with a fervent base of support that included cops, small business owners and people who thrill in attacking the poor and vulnerable—and then spreading to the vast majority of Republicans after he won the party nomination.

But from the beginning, he’s been pretty horrible at broadening that base. Luckily for him, he never had to. At every turn, the expected opposition, at least in the political mainstream, has seemed to melt away before him.

Contrary to the impression created in popular culture that we are a nation irreconcilably divided over every issue, an Associated Press poll from April 2016 showed that hating Donald Trump is a great uniter:

Seven in 10 people, including close to half of Republican voters, have an unfavorable view of Trump. It’s an opinion shared by majorities of men and women; young and old; conservatives, moderates and liberals; and whites, Hispanics and Blacks—a devastatingly broad indictment of the billionaire businessman. Even in the South, a region where Trump has won GOP primaries decisively, close to 70 percent view him unfavorably. And among whites without a college education, one of Trump’s most loyal voting blocs, 55 percent have a negative opinion.


In the early Republican primaries, Trump had the support of about a third of voters. It’s disturbing that a campaign based on hard-right nationalism and quasi-open racism would get such high numbers, but that’s unfortunately nothing new.

Pat Buchanan’s similarly nasty 1992 Republican primary campaign had similar levels of support. The reason you probably haven’t heard of Buchanan is that, like most fringe candidates before and since, he faced a Republican Party establishment united around their choice: George H.W. Bush, then the incumbent president.

Trump fared differently than Buchanan not because, as many might think, of his reality show skills, but because in 2016 that same party establishment was in deep crisis—and poised to be sacked by the orange barbarian at the gates.

ONE OF the most important themes of U.S. politics in recent decades has been the Republicans’ transformation from the leading party of world capitalism to a motley mix of myopic zealots-- Koch brothers-funded radical libertarians, racist reactionaries, anti-abortion fanatics and so on—who still command the enormous resources and power that go along with being one of the only two sanctioned parties in the world’s richest country.

The party’s hard-right shift has been in part a reaction to the Democrats’ own conservative shift under Bill Clinton and Barack Obama to become the party of Wall Street and Silicon Valley, but also because world events have undermined many of the party’s previous strengths.

George W. Bush’s disastrous Iraq invasion weakened the Republicans’ reputation as the party of national security, the 2007-08 global financial crisis and bank bailouts undermined the ideology of the free market, and the tremendous gains of the LGBTQ movement peeled away support for the Republicans’ anti-gay “wedge issue” strategy.

In response, the Republicans became politically vacuous—able to dominate many states through gerrymandering, voter suppression and mammoth tax breaks for leading local companies, but lacking any coherent national message beyond whipping up anti-Obama hatred.

Republican politicians increasingly became a collection of loudmouths and lowlifes competing for the attention of a shrinking but passionate base of pure reaction. This was fertile ground for con artists like Sarah Palin, Newt Gingrich and Herman Cain to pose as presidential candidates for a few months, while auditioning for Fox News and selling their books.

Trump also, by many accounts, initially saw his presidential run as a simple exercise in brand-building, but his timing was different.

By 2016, the party diehards had moved too far to the right to accept another Mitt Romney type—and the strain of pandering to them while simultaneously appealing to the general public was too much for early favorites like Jeb Bush and Marco Rubio, who came across like traumatized Ken dolls after years of rough play.

As a result, the same level of support that made Buchanan a clear loser in a one-on- one race with George Bush Sr. back in 1992 was enough to win Trump many of the early states in a comically overcrowded 2016 Republican field.

Trump only started winning more than 35 to 40 percent of the vote in state primaries when his opponents tried to unite against him and publicly floated the idea of blocking his nomination at the party convention.

Trump may not have been that popular among Republican voters, but the party leadership was liked even less. The strategy backfired wildly, allowing Trump to claim that, once again, the elites were conspiring against him. Trump was able to win majority support in the Republican Party as a protest vote against the crooked party leadership.

MEANWHILE, THE Democratic Party was being rocked by its own internal rebellion, as Vermont Sen. Bernie Sanders came out of nowhere to seriously challenge what the entire country had assumed would be a yearlong coronation of Hillary Clinton as the party’s presidential nominee.

Sanders received equal or greater support in the early Democratic primaries than Trump—but unlike Trump, he faced a united party apparatus determined to keep him out. It’s now well-known that the Democratic National Committee engaged in unethical chicanery to help Clinton. But far more important was the fact that party insiders lined up almost unanimously against Sanders.

While the media reported that the Clinton-Sanders race reflected a “divided party,” the actual party was almost completely united—against Bernie. Hillary Clinton won 55 percent of the voter-based delegates in the primaries, but 92 percent of the "superdelegates"—officeholders, party apparatchiks and big donors—a stunning reflection of the chasm between the Democratic apparatus and the base.

Add in the fact that the political forces to the left of the Democratic Party were too small to build a strong third party campaign, and the result was that Trump was able to pose on Election Day as the only alternative to the Wall Street-funded status quo represented by Clinton.

Take a step back to look at the overall process, and you’ll notice a striking result.

The old-fashioned liberal program of Bernie Sanders was deemed too radical by the gatekeepers of American democracy to make it onto the ballot, but they left the door to the world’s most powerful office wide open to an erratic racist whose semi-fascist advisers spoke excitedly about launching a reign of chaos.

Sanders’ proposals for funding universal health care and college education through tax increases on the rich reignited the fire of protest that have made explosive appearances every few years for almost two decades—from the 1999 “Battle in Seattle” against the World Trade Organization, to the enormous protests against the Iraq War in 2003, to immigrant rights mega-marches of 2006, to the Occupy and Black Lives Matter movements in the Obama years.

But these movements have, for the most part, been defused by the Democrats’ recurring message that protesting is less important than entering the electoral arena to stop the latest threat of Republican apocalypse. Demands for amnesty for all immigrants and bringing all the troops home were dropped, Beltway talking points about bipartisan immigration reform and responsibly waging the fight against terror were adopted.

So Democratic Party leaders were far more united and confident than their Republican counterparts to shove an unpopular mainstream candidate down the throats of their base.

After all, they figured, even if Hillary Clinton was an uninspiring candidate, the Republicans were in such disarray that they were about to nominate a candidate who couldn’t possibly beat her in November. That went well.

SINCE THE election, Democrats of all stripes have freely admitted that Clinton was a terrible candidate who stood for little more than continuing the status quo and beating Donald Trump.

But the party as a whole—with the important exception of Bernie Sanders’ fight for single-payer health care-- is continuing the strategy of her disastrous campaign: Standing for as little as possible and hoping that Trump will be brought down by his own incompetence.

The Democratic establishment’s dream is that its party will be rewarded as the more responsible one to oversee the grossly unequal and dysfunctional system that people revolted against in the first place.

Ask yourself a question: Can you name the Democrats’ plan-- other than doing a better job than Trump-- for Puerto Rico or North Korea? Police violence or rising rents?

The fact that we don’t yet have that party means that, unbelievable as it may seem, Trump—or a more competent right-wing replacement—can continue to govern on his reckless path and maybe even get re-elected, unless the left is able to break through.